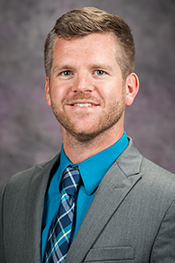 Professional Experience
Jared Hobeck received a bachelor's degree in general engineering from Montana Tech at the University of Montana in 2008, where he was an undergraduate researcher at the Center for Advanced Mineral & Metallurgical Processing. He earned a master's degree in mechanical engineering from Virginia Tech in 2012. While earning his master's, he was a graduate research assistant in the Center for Intelligent Materials Systems and Structures and in the Center for Energy Harvesting Materials and Systems from 2009 to 2011. Hobeck received a doctorate degree in aerospace engineering from the University of Michigan in 2014. He completed his postdoctoral appointment as a research fellow in the aerospace engineering department at the University of Michigan in 2017. During his postdoc, Hobeck was lab manager for the Adaptive Intelligent and Multifunctional Structures (AIMS) Lab. Since 2007 he has performed research in multiple academic, private, and government lab settings.

Hobeck's research interests include the following:

Academic Highlights
Hobeck's research has been published in numerous peer-reviewed international scientific journals. He has also published several conference articles and has had the opportunity to present his research at conferences across the globe. He was invited to give a research lecture at the Naval Research Laboratory in Washington, DC. He was selected to participate in the Science of Signatures program at Los Alamos National Laboratory, and is also a member of the Tau Beta Pi engineering honor society. His research on piezoelectric grass has recently been featured by a show on FOX. While a postdoc, Hobeck mentored and co-advised ten students at the undergraduate and graduate level where work with two doctoral students resulted in being awarded a total of $820,000 on two unrelated NASA projects for which he was a co-PI. Hobeck is on the organizing committee for the ASME SMASIS smart materials conference. He won the best student paper award at SMASIS in 2011 where he was also a best hardware finalist. During his undergraduate studies, he passed the FE exam, won the outstanding student of the year award for his department, and won his first research proposal.