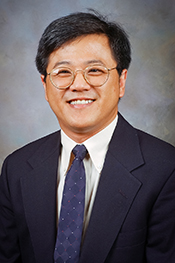 Professor Liang-Wu Cai received a bachelor's degree in solid mechanics from the University of Science and Technology of China in 1985 and master of engineering in solid mechanics from the Institute of Mechanics of the Chinese Academy of Sciences in 1988. After, Cai worked in government for two years and came to the U.S. in 1990 to pursue his doctoral degree. He studied in the University of Tennessee Knoxville for 2 years, and then move Massachusetts Institute of Technology in 1992. He earned his doctor of science degree in applied mechanics from MIT in 1998. He stayed at MIT as a postdoctoral associate, and joined the Mechanical and Nuclear Engineering Department at K-State in 2001. Since 2001, Cai has held several visiting appointments: faculty fellow at the Naval Research Laboratory in Washington, D.C. in 2006 and 2008, visiting professor in Polytechnic University of Valencia of Spain in 2007 and 1011, and adjunct professor in Pennsylvania State University in 2010. Since 2006, Cai has served in various positions in the ASME Noise Control and Acoustics Division, from chair of Technical Committee on Physical Acoustics to member of the Executive Committee, and served as the Division’s Chair from in 2013 and 2014.

Cai’s research has in recent years been focused in the wave propagation in various media using both analytical and computational approaches. Cai has been active the emerging area of phononinc crystals and acoustic metamaterials. These materials could be designed to possess otherworldly properties that enable fascinating phenomenon such as acoustic cloaking, which could open a pathway to more broad engineering applications for the control of mechanical motions, include vibrations, sound and noise. While pursuing emerging topics in this field, Cai remains interested in the areas of his prior training: nondestructive evaluation of materials, the computational mechanics and the mechanics of composite materials, and broadly, applied mechanics.

Cai has recently published one undergraduate textbook on Fundamentals of Mechanical Vibrations by John Wiley & Sons. Before coming to the U.S. in 1990, he co-authored two textbooks on composite materials published in China. Cai has served as an associate editor for ASME Journal of Vibration and Acoustics from 2010 to 2016. Since 2007, Cai has been a track chair or co-chair for the annual ASME International Mechanical Engineering Congress & Exposition. Cai was elected Fellow of the ASME in 2016.