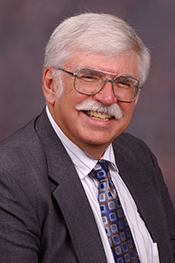 Professor B. Terry Beck received his bachelor's (1971), master's (1974), and doctoral (1978) degrees in mechanical engineering from Oakland University, Rochester, Michigan. In January 1979, he joined K-State as an assistant professor, and was promoted to associate professor with tenure in 1983. From 1989 to 1991 he was awarded an extended two-year sabbatical at the United States Air Force Academy to conduct research in the Frank J. Seiler Research Laboratory. Subsequent to his return from sabbatical, he became co-founder and director of the Non-Contact Precision Measurements Laboratory at K-State, and was promoted to full professor in 2001. In the summers of 2002 through 2004 he was awarded three consecutive ASEE Summer Faculty Fellowship appointments at the NASA Langley Research center in Hampton, Virginia.

Beck's areas of expertise are laser velocimetry and optical measurements (LDV, PIV, PLIF), heat transfer, fluid mechanics, and two-phase flow. His research includes the development and application of optical measurement techniques, and laser-based diagnostic testing for industrial applications. It is currently focused primarily on two independently funded research areas involving the application of non-contact optical measurements: (1) instrumentation for surface strain measurement on prestressed concrete based on a laser-speckle and/or surface feature tracking principle, and (2) the development of a unique and very new type of non-vapor compression refrigeration based on a cavitation cooling effect.

He is co-inventor of a Portable High-Resolution Non-contact Modular Sensor for Surface Strain Measurement, which is an outgrowth of this work. Research funding sources include ASHRAE, NSF, FRA, DOT, NASA, DOE, AFOSR and private industry.

Beck has authored or co-authored more than 100 journal publications, conference papers and technical presentations. He has advised or co-advised one post-doc, four doctoral students, and 18 master's students, along with the numerous honor's students in mechanical and nuclear engineering. His work has resulted in one patent, one provisional patent and four patent disclosures.

Beck is a member of Tau Beta Pi, Sigma Xi, ASEE, Pi Tau Sigma, ASME, Phi Kappa Phi, SPIE and ASHRAE honorary and professional societies. He has served the professional engineering community as chair of the ASHRAE Fundamentals Handbook Revision Committee since 2005. He has been chair of numerous other ASHRAE committees and sub-committees, including TC1.2 Measurements and Instruments. He has served as chair to the ASME Young Engineers Paper Contest for more than 10 years. He has served as a technical reviewer for ASHRAE Transactions, ASME Journal of Fluids Engineering, McGraw Hill, Macmillan, Applied Mechanics Reviews and The International Journal of Nuclear Energy Science and Technology.

Beck has taught 12 different undergraduate courses and eight different graduate courses in mechanical engineering at K-State, including both on-campus and via distance education. Topics in these courses span the fluid and thermal sciences, mechanical engineering design, and optical measurements. In 2016 he was ranked a Top 25 Professor of Mechanical Engineering by OnlineEngineeringPrograms.com, a blog that recognizes outstanding educators in specific areas of study. He received the Charles H. Scholar Faculty Award from the K-State College of Engineering in 2013. His teaching and advising was awarded a Certificate of Recognition from the Mortar Board Senior Honor Society, K-State Chapter, in 2011. In 2005 and 2009 he received the Outstanding Adviser Award from the Mechanical and Nuclear Engineering Department. In 2008, he received the Bob Snell Distinguished Career Award for Excellence in Undergraduate Teaching.