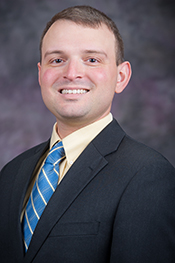 Amir Bahadori received bachelor's degrees in mechanical engineering with a nuclear engineering option, and mathematics from Kansas State University in 2008. He then attended graduate school at the University of Florida, studying medical physics and earning a master's degree in 2010. Bahadori was awarded a NASA Graduate Student Research Program Fellowship in 2009, and in summer 2010 worked as an intern at NASA's Lyndon B. Johnson Space Center, or JSC, in the radiation health officer group. He accepted a full-time position as a NASA contractor in October 2010 and earned his Ph.D. degree from the University of Florida in December 2012. Bahadori became a NASA civil servant in January 2013 with the space radiation analysis group at NASA JSC. In his time there he substantially upgraded the tools used to calculate astronaut risk from medical exams involving ionizing radiation, coordinated astronaut radiation-risk reporting, led particle accelerator-based data collection and served as principal scientist for the advanced exploration systems rad works radiation environment monitor project. In December 2015 Bahadori joined the department of mechanical and nuclear engineering at K-State as an assistant professor and in March 2021 he was promoted to associate professor with tenure.

Bahadori is the director of the Radiological Engineering Analysis Laboratory, or REAL, at K-State. His research is focused on the characterization of radiation environments, understanding the response of humans and electronics to radiation exposure using both experimental and computational techniques, and radiation imaging. Bahadori is collaborating with researchers in the space radiation analysis group at NASA JSC on development of novel active-shielding architectures to enable long-term exploration missions to the moon and Mars. He has worked on several Department of Energy-funded projects through the plant-directed research and development program at the Kansas City National Security Campus in Kansas City, Missouri, on topics including x-ray dosimetry for electronic components and development of novel GaN-based radiation detectors. Bahadori also studies use of advanced computational phantoms in bioheat transfer applications.

Bahadori, a Certified Health Physicist, teaches courses related to nuclear and radiological engineering, including NE 690, Radiation Protection and Shielding; and NE 691/891, Radiation and Human Health. He has authored or co-authored nearly 80 peer-reviewed publications, including 12 NASA technical papers, with more than 700 citations and an h-index of 14, according to Google Scholar. Bahadori has presented at numerous meetings in the U.S. and abroad, including the Medipix Open Meeting at CERN, Workshop on Radiation Monitoring for the International Space Station, American Association of Physicists in Medicine Annual Meeting, American Nuclear Society Annual and Winter Meetings and the Health Physics Society Annual Meeting. In 2018, Bahadori was awarded the Committee on Space Research (COSPAR) Zeldovich Medal by Scientific Commission F, Life Sciences as Related to Space. He has been a part of two teams that were awarded NASA Group Achievement Awards. Bahadori was selected as a Big 12 faculty fellow for the 2022-2023 academic year. He is a member of the Radiation Research Society, International Radiation Physics Society, Health Physics Society, American Nuclear Society, Alpha Nu Sigma and Tau Beta Pi.