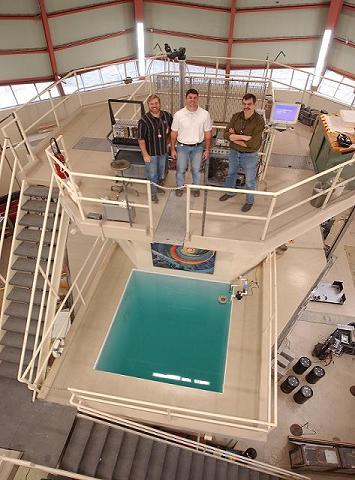 The in-core and in-pool irradiation facilities include a well in the reflector around the core, central thimble, fuel spaces, pool, a pneumatic "rabbit" sample transit system, and small penetrations in the upper grid plate. Ex-core irradiation facilities include penetrations from the edges of the core to the experiment floor surrounding the reactor shielding, a section of graphite accessible from the experiment floor, a section of graphite accessible under water, a neutron source, and a panoramic irradiator for dose calibrations.

The graphite reflector around the reactor core has a 10 inch deep well about 3 inches from the core, allowing for a large number of samples to be placed in a high neutron flux.

The highest neutron flux in the core is available in the center at the mid-plane. An aluminum liner positions samples in the "central thimble." The central thimble (1.33 inches in diameter) extends 7.5 inches below the bottom of the reactor core, but a spacer holds samples at the core midplane.

The facility has two dry tubes that can be positioned in any space normally occupied by fuel or the neutron source. The tubes are configured with an S-bend to limit radiation streaming form the core. The tubes currently available were constructed to deliver fast neutrons to samples. 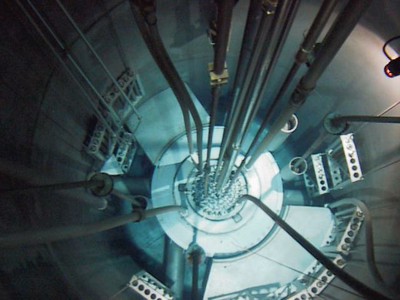 Spaces below and above the core, and spaces outside the reflector are authorized for use in sample irradiation. Neutron irradiation of relatively large samples (as opposed to the 1.25 & 1.33 in spaces of other core sites) is possible. Some gamma irradiation is possible by operating the reactor at high powers then inserting samples in the spaces surrounding the core. Total dose is dependent on an exposure rate that varies with time as e(-λ*t), with λ determined from experimental data.

A helium driven pneumatic system can be installed if needed to support research using very short lived radioisotopes. The in-core rabbit system consists of two parallel tubes that join just above the core (shown on right). Samples sizes up to 0.5 inches in diameter and 4 inches long can be inserted in the "rabbit" system, and delivered to the neutron activation analysis laboratory.

There are four beam ports. One of the beam ports penetrates the core reflector, so that fission-energy neutron and gamma radiation can be extracted into the volume of the piercing beam port or out onto the experiment floor. The photograph on the left shows the tangential beam port; the photograph below shows an experiment being conducted at the port. One beam port is extracted from the reflector with an orientation that does not allow "first-flight" fission neutrons directly into the beam; all neutrons scatter before entering the tangential beam port. The remaining beam ports are radially oriented to the center of the core. 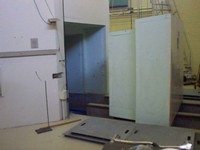 One side of the reactor contains 4 ft3 of graphite. Access to this column requires movement of a 6 foot thick concrete door, as shown. The graphite is composed of 4 in2 blocks 50 inches long. There is a 2 in sheet of lead inside the reactor pool wall to reduce gamma streaming into the thermal column. The thermal column is encased in an aluminum casing lined with Boral and polyethylene. 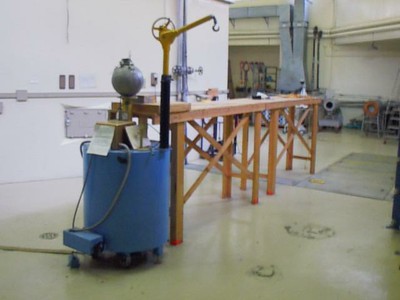 Californium 252 spontaneously fissions, providing a significant source of high energy neutrons. The K-State reactor facilities has a large 252Cf source in an irradiator shown below. The sphere at the top of the irradiator is in place to provide a neutron energy spectrum similar to the neutron energy characteristics of a nuclear reactor; the spectrum permits calibrating neutron dose rate meters for use in a reactor environment, as well as various activation, imaging, and detection research efforts. If the sphere is removed, the irradiation provides a high energy neutron source. 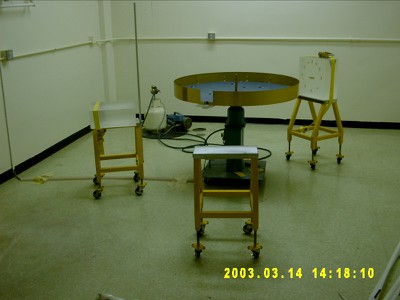 The facility maintains a panoramic irradiator for experiments and calibrations related to personnel dosimetry.