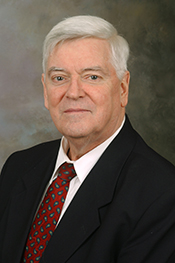 Professional Experience
J. Kenneth Shultis graduated from the University of Toronto with a B.A.Sc. degree in engineering physics. He earned M.S. (1965) and Ph.D.(1968) degrees in nuclear science and engineering from the University of Michigan. After a postdoctoral year at the Mathematics Institute of the University of Groningen, the Netherlands, he joined the nuclear engineering faculty at Kansas State University in 1969. In 1978 he spent a sabbatical year at the Institute for Turbine Research at the University of Karlsruhe. He held a senior reactor operator license SOP-2158 from 1974-1976 for KSU’s TRIGA MARK II Reactor. He presently holds the Black and Veatch Distinguished Professorship and is the Director of the Nuclear Engineering Program. He has served as a consultant for numerous private and government organizations over the years.

Research
Professor Shultis conducts research in neutron and radiation transport, radiation shielding, reactor physics, numerical analysis, particle combustion, remote sensing of the environment, and utility energy and economic analyses. Dr. Shultis is presently performing research in radiation shielding and in analyses of the designs and applications of the many novel radiation detectors presently being fabricated at KSU's SMART laboratory, a facility unique among US universities. These relatively inexpensive detectors with their unprecedented smallness, effectiveness, ruggedness, are presently being considered by many outside agencies and industries for a variety of diverse application including detecting hidden nuclear devices in cargo containers, monitoring in real time the three-dimensional neutron distribution in nuclear reactor cores, detection of hidden radioactive sources and dirty bombs, personnel neutron monitoring, novel medical instruments for small laboratory animals, radiation-resistant long-lived detectors for naval reactors, and environmental radiological monitoring, as well as for classified national security applications. Dr.  Shultis' radiation shielding research has been used to design safe storage facilities for spent nuclear fuel and for designing new classes of electron accelerators for producing painted products without the need for paint solvents which often result in environmental pollution.

Academic Highlights
Shultis is a Fellow of the American Nuclear Society, and has received many honors and awards for his teaching and research. In particular, he recently received from the American Nuclear Society the infrequently given Rockwell Lifetime Achievement Award for more than 50 years of making contributions to the radiation shielding community. Dr. Shultis is the coauthor of 5 text books: Principles of Radiation Shielding, Radiological Assessment, Fundamentals of Nuclear Science and Engineering, Radiation Shielding, and Exploring Monte Carlo Methods. He has written more than 150 research papers and reports and served as the major professor for over 45 M.S. and Ph.D. students.