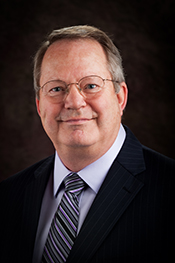 Professional Experience
From 1974 to 1977, Fenton worked at IIT Research Institute in Chicago as a research engineer. He was responsible for obtaining and directing projects involving design, fabrication, and operation of aerosol sampling equipment, characterization of aerosols and particulate systems using the latest particle analyzing instruments, and supporting industrial sponsored projects.

Fenton joined K-State in 1986 as an associate professor and was promoted to professor in 1992. He served as acting department head for the 1994-1995 academic year, the spring 1998 semester, and department head from fall 2009 to spring 2014. He is a licensed engineer in Kansas.

Research
Principle Investigator with numerous projects relating to refrigeration and energy conversion systems. Among these are quantitative risk assessment of ammonia release mitigation systems, analysis and simulation of emergency cooling systems, crud deposition on nuclear reactor cladding, ANSI/ASHRAE Standard 15 user’s manual, analysis and risk assessment of double-walled heat exchangers, characterization of forced ammonia plumes in the atmosphere, combustion of ammonia with and without oil, measurement of ammonia absorption into water, dynamic simulation of the steam-water side and the air-gas side of a coal-fired power plant and others.