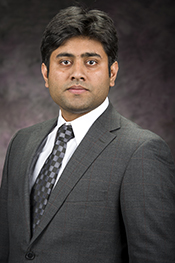 Professor Hitesh Bindra obtained his undergraduate education in chemical engineering from Panjab University (India) in 2002. He then worked as scientific officer for an Indian Government undertaking on nuclear power projects from 2002 to 2005. In 2005, he moved to University of Illinois at Urbana-Champaign to pursue graduate studies in nuclear engineering. During his stay at University of Illinois, he simultaneously worked at simulation center of Caterpillar, Inc. After receiving his doctoral degree in 2010, he moved to City University of New York Energy Institute for postdoctoral research on thermal energy storage and high temperature systems. His research work at CUNY led to several inventions and their further commercialization. Bindra came to K-State in spring 2014 and has established Nuclear Energy Systems Transport (Nu-EST) Laboratory. He has more than 14 years of research and development experience in nuclear/thermal engineering and has been involved in several industrial and academic research projects.

Bindra has authored more than 15 peer-reviewed publications, and more than 20 conference papers. His research group presented several talks at national/international conferences, universities and workshops. His undergraduate and graduate students have won awards at university- and national-level for their research presentations. Bindra is a recipient of NSF First Award as well as Bruce W. Spencer and Sargent & Lundy fellowships for outstanding research and academic achievements. He is an active reviewer for top journals in the field of nuclear energy, thermal sciences and complex fluids.